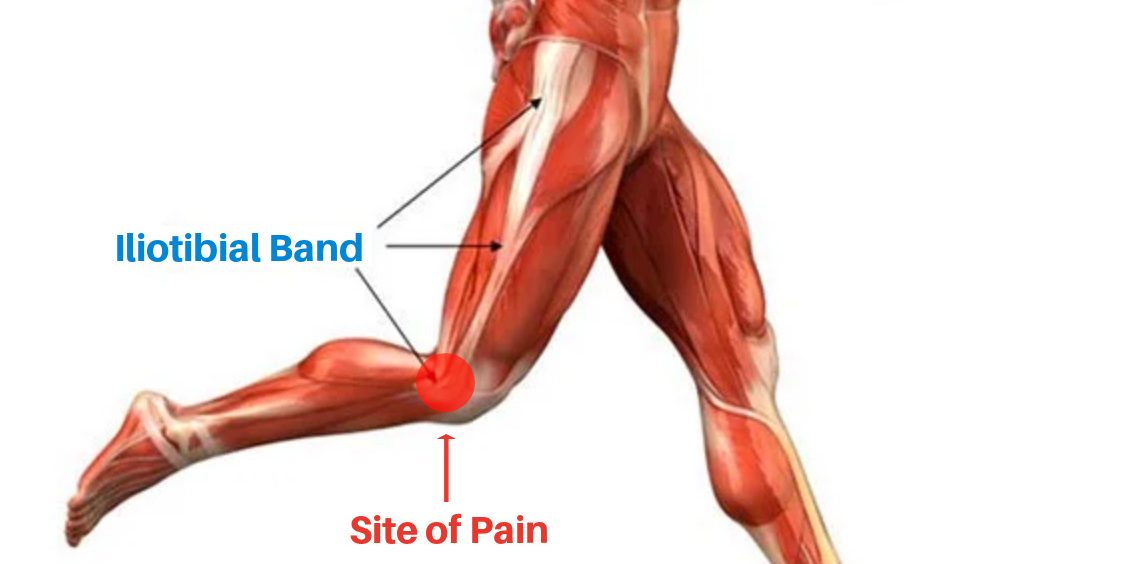 Iliotibial band (ITB) syndrome is one of the most common overuse injuries in runners. It is also seen in cycling and other activities that require repetitive bending of the knee. Treatment must focus on eliminating the causative factors. Virtual Physical Therapy can help identify biomechanical issues and educate you on how you can get back to running pain-free! 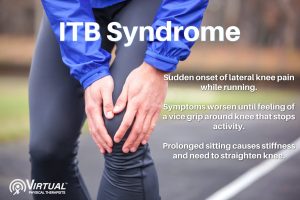 ITB syndrome usually starts suddenly as discomfort or even burning on the outside of the knee. It can quickly turn into a sharp pain and quickly progress to a feeling of a vice around your knee that gets tighter and tighter until the pain stops you from moving. Initially, the symptoms are only brought on by aggressive activity such as running and cycling but as they progress, sitting with your knee flexed becomes unbearable, requiring straightening of the knee to release pressure.

The number one cause is too many miles! Minor issues with running mechanics become exacerbated when fatigued, and your muscles are weakened from overtraining. Not allowing your body time to heal leads to poor mechanics, tears in soft tissue, damage. In the case of ITB syndrome it is due to irritation and thickening of a fat pad over the femoral epicondyle that the ITB repetitively compresses.

Banked surfaces (always running in the same direction as road camber) and downhill running (eccentric muscle control gives way faster when fatigued) can cause increased stress and compression of the ITB. 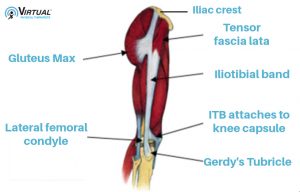 The ITB is a thick fibrous band extending from above your hip to below your lateral knee. The proximal portion begins as a sheath encasing the tensor fascia lata muscle. This sheath anchors the tensor fascia lata to the iliac crest and receives most of the superior gluteus maximus tendon. The dense ITB then extends all the way down the lateral leg and transitions to a ligamentous component, spanning from the lateral epicondyle of the femur (just above the outside knee) to five insertion points distally including the knee capsule and Gerdy’s tubercle just below the lateral knee.

The ITB acts as both a stabilizer for the hip and knee as well as elastic energy during walking and running. It is a distinctive tissue in that it has some properties of a tendon but most of a ligament. It is also unique because humans are the only mammal to have one. It is theorized that the ITB aids in our ability to stand on one leg and walk upright and is not needed in 4 legged mammals. We are not born with a distally inserting ITB, but rather developed as we learn to walk.

The iliotibial band transmits the forces generated by the TFL and gluteus maximus muscles, including thigh abduction, flexion, extension, and external rotation. The deep fascial component, which runs almost the entire femur length, is most taut when the gluteus maximus and TFL contract. This “tensile” action significantly increases during single-leg stance and serves to counteract medial bowing of the femur.

The ITB is actually a ligament/tendon hybrid because it has a bone-to-bone connection as seen in ligaments and muscle-to-bone connections as found in tendons. The ITB is NOT anchored to a bone at a clear, specific spot like most tendons. Instead, it blends into five different areas distally including the knee capsule. Tendons are smaller, dense connective tissue at the end of the muscle. The ITB, on the other hand, connects the muscles by a very thin sheath and is massive compared to the muscles it connects.

The gluteus muscle pulls on the ITB to increase its tension laterally, like drawing a bowstring. It is then tightly anchored along the entire length of the femur, especially above the knee. The ITB does not really move freely in relation to the femur. It is firmly attached. The only slight movement may be at the insertion at Gerdy’s tubercle, just below the lateral knee.

Iliotibial band syndrome occurs secondary to repetitive compression. Faulty mechanics caused an increase in compression at the distal end of the ITB as the hip extends and the knee flexes.  The bony prominence of the lateral epicondyle has a protective synovial tissue or fat pad. This synovial tissue can become irritated, thickened, and even calloused. Once calloused, it can be felt like rubbing over a rubber band. 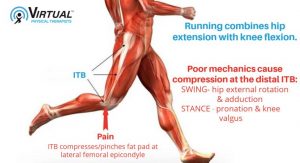 Biomechanics that cause an increase in the compression of the ITB include genu varum (knees go inward), increased pronation, and hip weakness. These are in opposition to the role of the ITB, to pull on the femur laterally like a bowstring.

The main problem and symptoms occur at 30 deg of knee flexion with the hip in slight extension – this is when the ITB is mostly clamped down.

The ITB is most taunt when the hip is extended and the knee is flexed to 30 degrees. The hip goes into extension during the swing phase of running when the knee bends. Severe symptoms almost completely abolish as soon as the individual stops walking because the hip does not extend in walking. The faulty mechanics found in those that suffer from ITB on the painful side include 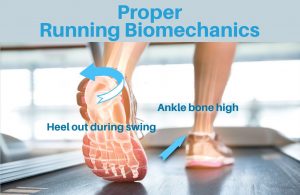 The faulty mechanics are exacerbated with fatigue as the muscles tire leading to weakness in hip abduction weakness causing the hip to drop inward and tibialis anterior fatigue causing pronation of the foot. Road cadence – constantly running on one side of the road places uneven stress on the leg, and poor footwear can cause increased pronation. 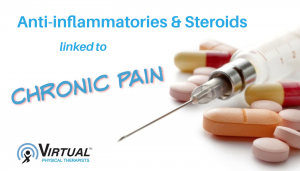 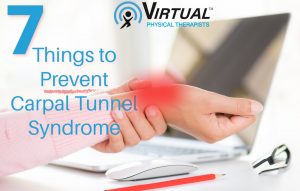 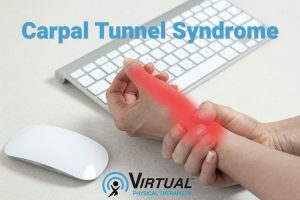