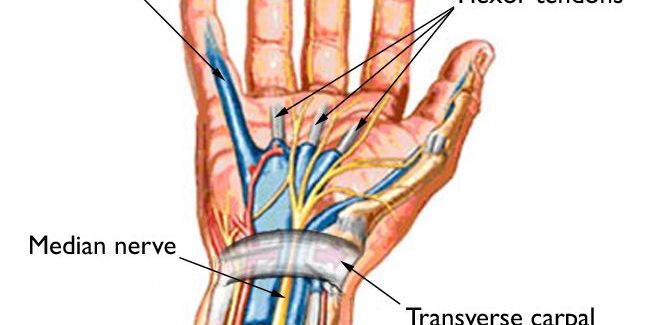 What is Carpal Tunnel Syndrome (CTS)?

Carpal Tunnel Syndrome is associated with numbness/tingling in the thumb and first three fingers and can also cause weakness in the hand, particularly the thumb.  It is caused by compression of the median nerve, when it is pressed or squeezed at the wrist.

Anatomy of the Carpel Tunnel:

The carpal tunnel is a narrow passageway of ligament and bones at the base of the hand.  The median nerve runs from the forearm through this tunnel to the wrist, along with tendons of muscles that are responsible for bending the fingers.  The median nerve provides sensation to the thumb, index, middle, and part of the ring fingers on the palm side of the hand. It also controls small muscles at the base of the thumb.

What are the symptoms of Carpal Tunnel Syndrome?

Symptoms of CTS usually start slowly and then gradually progresses. They include: intermittent burning, tingling, or numbness in the palm of the hand, thumb and first three fingers.  Some say their fingers feel useless and swollen, and have an urge to “shake out” their hand.

Many complain of symptoms at night, because the wrist is held in a bent position, compressing the nerve.  As symptoms worsen, many then feel tingling during the day. Decreased grip strength may result as symptoms continue, causing difficulty with grasping, or performing other manual tasks. In chronic cases, the muscles at the base of the thumb are visibly wasted and look sunken. Some people have difficulty distinguishing between hot and cold by touch.

What are the causes of Carpal Tunnel Syndrome?

Carpal tunnel syndrome is caused by compression of the median nerve. When space is narrowed in the carpal tunnel the nerve is compressed. This can be caused by a number of factors including mechanical stress of repetitive and/or sustained wrist flexion, inflammation/ swelling and wrist dislocation/fractures.

The most common cause of Carpal Tunnel Syndrome is mechanical.  Mechanical stress includes: repetitive/sustain wrist flexion, and repetitive use of vibrating hand tools.  It can also be a result of a combination of factors, such as trauma or injury to the wrist that cause swelling, an overactive pituitary gland, an underactive thyroid gland, rheumatoid arthritis, fluid retention during pregnancy or menopause, or the development of a cyst or tumor in the canal.  These space occupying factors contribute to compression of the median nerve.

How is Carpal Tunnel Syndrome diagnosed?

Before the diagnosis of Carpel Tunnel Syndrome is made, a medical history and mechanical assessment must be performed, to first rule out any possibility that the symptoms are coming from a problem at the neck or another conditions with similar symptoms.  Repeated movements and special tests are performed to reproduce the symptoms and confirm the diagnosis.

Electrodiagnostic tests may help confirm the diagnosis of CTS.  It is a is a special recording technique that detects electrical activity of muscle fibers and can determine the severity of damage to the median nerve.

How is carpal tunnel syndrome treated?

Early intervention that includes education and avoidance of wrist flexion is critical in minimizing further compression and damage to the median nerve.  A mechanical assessment may produce a directional preference5, which is usually extension, but some may show a positive response to flexion.  In these cases flexion of the wrist will be the treatment to reduce/abolish symptoms.

For many the mechanical stress of repetitive or sustained wrist flexion must be reduce or eliminate for a period of time.  If the carpel tunnel size is already compromised because of swelling or a space occupying lesion, even a slight amount of wrist flexion will further compress the median nerve.  It is imperative that avoidance of further nerve compression is initiated immediately.  A wrist brace to avoid flexion is advised, especially to be worn at night.

Treatment starts with education to understand the cause and what movement will cause further compression and what positions will reduce further damage to the median nerve. A review of daily activities that may cause compression of the nerve must also be reviewed.

Are there ways to prevent carpal tunnel syndrome?

Prevention starts with understanding the cause and effect relationship.  The cause of CTS is median nerve compression and effect would be flexion results in a compressive stress.  If we are able to minimize movement or activity that cause compression of the nerve, we will be able to reduce stress on the nerve and aide in prevention of injury.

At the workplace, employers can develop ergonomic programs that assess each essential job task to assure proper mechanics.  Workers can do on-the-job stretching exercises, take frequent rest breaks, and ensure correct posture and wrist position.   Workstations, tools and tool handles, and tasks can be redesigned to enable the worker’s wrist to maintain a natural position during work.  Jobs can be rotated among workers.